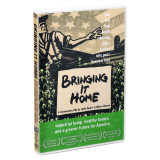 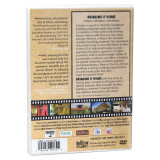 Industrial Hemp is making headlines in American media with the recent Farm Bill amendment allowing hemp research crops in ten states. But why does Federal policy still classify and confuse this non-psychoactive plant with marijuana as a drug? Bringing It Home tells the story of hemp’s past, present and future through interviews with global hemp business leaders and entrepreneurs, archive images, animation and footage filmed in Europe and the United States.

The film features the designer of “America’s First Hemp House” and his quest to find the healthiest building material available to construct a safe environment for his daughter with chemical sensitivities. He discovers non-toxic, carbon neutral hempcrete that is recyclable, pest-fire-mold-resistant and cuts energy bills in half. But the major drawback for US builders is that the fiber for hempcrete must be imported. Current U.S. Federal policy does not distinguish hemp from its psychoactive plant cousin marijuana, despite a long history of hemp farming in America up until the 1940s.

Bringing It Home follows the hemp trail to the U.K. where business owners, researchers, farmers and Kevin McCloud, TV host of Grand Designs, discuss industrial hemp use in their country. Also featured are interviews with CEOs of million dollar U.S. companies that are importing hemp for healthy, sustainable products, and those working for policy change at the state and federal levels. A lobbyist for the CA Narcotics Officers Association gives voice to the opposition.

Bringing It Home makes the case for all the benefits of a misunderstood plant that will leave viewers wondering: why aren’t we growing it here?