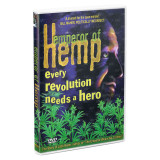 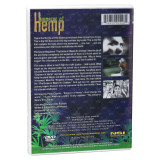 The best-selling book “The Emperor Wears No Clothes” blew the lid off the anti-hemp conspiracy and explained all there is to know about an easy-to-grow plant with infinite, non-intoxicating uses. Why is hemp illegal? The information is in this film … and you won’t believe it!

The video is about a man’s fight for truth, justice … and a plant. What began as his singular battle has turned into a massive movement to educate America about this environmentally friendly, beneficial plant. “Emperor of Hemp” exposes government and big-business efforts to keep the plant illegal, and takes you to the front lines of the pro-hemp movement. Meet “The Emperor of Hemp,” Jack Herer, the man behind “The Emperor Wears No Clothes.” Find out how his passionate journey began. Discover how he overcame hurdle after hurdle. Cheer his ultimate vindication.

Narrated by Peter Coyote, “Emperor of Hemp” could change the world … if the American public finally realizes “The Emperor Wears No Clothes.”

$14.95
$14.95
$9.95
by Doug Fine Dispatches from the Front Lines of the Next Agricultural Revolution Bestselling author Doug Fine embarks on a humorous yet rigorous journey to meet the men and women who are testing,...
Add to Basket
Add to Basket

$30.00
$30.00
$25.00
A definitive study of the worlds most useful plant. By Kenyon Gibson, Nick Mackintosh, Cindy Mackintosh Foreword by Woody Harrelson Mankind is faced today with the challenge of preserving the...
Add to Basket
Add to Basket

Hemp and the Rule of Law

$20.00
$20.00
$18.00
A documentary by Kevin Balling Blending history with current events, this one-hour documentary traces hemp’s legendary past in U.S. agriculture and chronicles the heated debate to return the crop to...

$20.00
$20.00
$18.00
The Hemp Revolution tells the amazing and little known story of the Hemp plant. Hemp, probably the first plant ever to be cultivated, was among the world’s largest agricultural crops until the 1800’s...